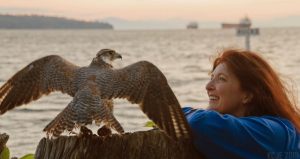 Joanne Bentley has been a Journeyman Falconer in the Art and practice of Falconry for over 15 years. She has handled birds-of-prey in three countries, and studied with such luminaries as Jemima Parry-Jones, Andy Hinton, and David Horobin.

Joanne is a fervent advocate for all wildlife – and wild spaces. From childhood she’s been especially charmed-from-afar by birds-of-prey, and often jests it was “Marion Zimmer Bradley’s fault” for her becoming hopelessly fascinated by raptors to begin with. At the impressionable age of 8, Joanne read “Hawkmistress”, and the rest, as they say, is history.

The task of a Journeyman – in any trade, is to find some discreetly new information or methodology which expands the sum understanding of all practitioners involved.

Given the Art of Falconry possesses well over 8,000 years of history, finding some overlooked nuance is no small undertaking. Nevertheless, Joanne committed herself to the subtle – and critical – exploration into the ‘expression of relationship’, thus enlarging the concept put forth by her mentor, Frederick II of Hohenstaufen, through his text “The Art of Falconry” composed in the mid 13th Century.

The ‘expression of relationship’ is the central pillar upon which Joanne is able to elicit nuanced performance skills from her Feathered companions – on demand – for film, television, web-series, and other film-production teams. Without the two-way trust between human and non-human, the truthful performances in the body of work Joanne and her assistants have thus far achieved with “Team Feathers” would not be possible.

Joanne’s intention has always been to inspire awe in audiences “through the eye of the camera”, and through inspiring wonder, move others into massive acts of advocacy on behalf of the natural world…on which all life depends.

When not working with the Feathered to achieve new performance skills, Joanne keeps herself in fighting-trim on her 81 acre property, ‘Falcon’s Rest’, studies the latest science-informed raptor research, and continues the labour of love on her upcoming series of novels.