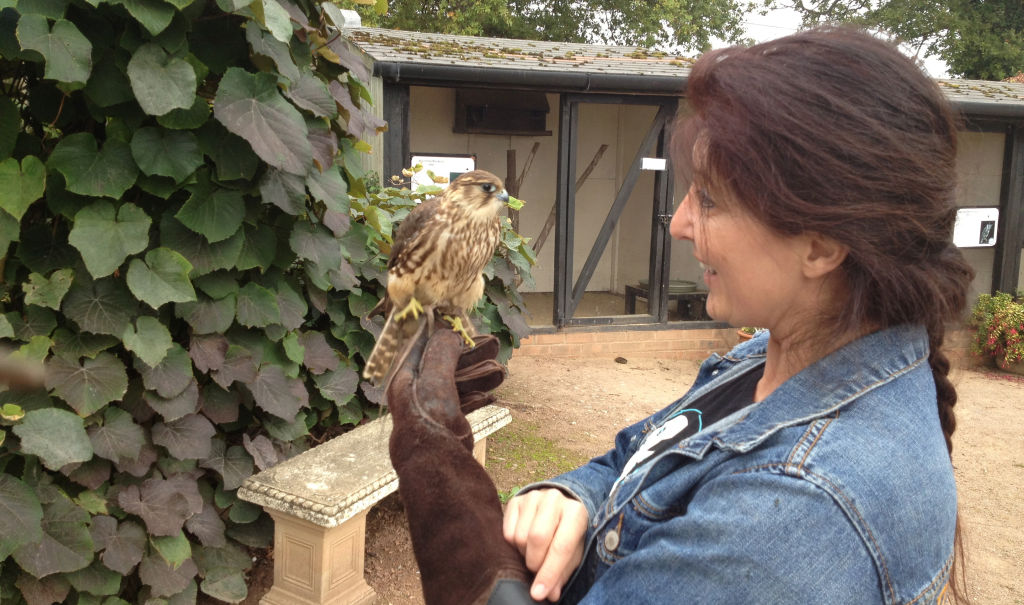 Comments Off on The Ethical Falconer or, “what you don’t know will kill them” Part 1

“If you can reach out and touch, and love, and be with wildlife, you will forever be changed,
and you will want to make the world a better place…”
~ Terri Irwin ~

Let me preface the point of this post with the following: “All one need know about what birds of prey do not eat or prey-upon can be understood by watching what wild raptors have on their menu – daily. From there, one need only follow Nature’s guidance on the subject.”

Many who’ve taken courses with us, or those who’ve invited us to give presentations for them know I had the tremendous privilege of attending the 2nd International Falconry Festival in 2009.

I’d been invited to facilitate educational presentations for British school-children by David Horobin, the author, historian and contributing architect to UNESCO’s enshrinement of Falconry into the “Intangible Human Heritage” list.

There were 250+ Falconers in attendance for the 2009 Festival, and so many raptors of every shape and description my eyes ached.

I was privileged to assist Karl Ledley with his Goldies, ‘Khan’ and ‘Heidi’, and meet and talk captive-breeding with Jemima Parry-Jones, (who allowed me to handle ‘Watamu’, one of her Verreaux’s Eagles).

I spoke with the director of the Hawk Conservancy Trust, Andy Hinton, who invited me to come back and learn more about schooling eagles, (which I did in 2014), and I benefitted from the long knowledge of Terry Large on the subject of moulting. There were a host of others there, many of whom have been practicing the Art for forty, fifty, or even sixty-plus years.

Throughout that first, two week adventure, the only time I witnessed 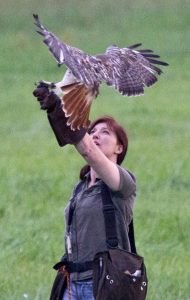 anyone, anywhere feeding day-old chicks to their Feathered-companions was as a means of retrieving a fox-lure from a huge Golden eagle determined to take it home with her. Quail was the near-exclusive food source, with the owls on educational-display at the Festival receiving rodents for dinner.

Nowhere in Nature will you find top predators feeding to the point of exclusivity on “day old anything”. Nowhere. Further, the suggestion day-old cockerels are a “natural” food source for birds-of-prey is pure fiction.

Yes, like all predators, birds-of-prey are only too happy to benefit from a “low-energy-chase” when they can; it is stressful being a hunter, and an easy meal simplifies things.

What is key here is the fact raptors are hunters. They pursue and feed on largely adult prey. Adult. As in, “fully grown”. Prey possessing hardened skeletons, and fully developed muscles and organ systems.

Not the mobile equivalent of bargain-brand hot-dogs.

Day-old rooster chicks are scarcely an hour old when they’re culled. Were they permitted to live, the chicks would survive on the nutrition stored in their yolk-sack for the first two or three days, mimicking the hen until they’ve learned why she repeatedly whacks the ground with her face. The yolk is the only part of the chick which contains nutritive value — and the yolk is routinely thrown away by most raptor-handlers.

The skeleton of the day-old chick scarcely qualifies as cartilage, and their organ systems are rudimentary, providing little or no utilitarian value — nutritionally speaking. Compound this fact by rapidly thawing the frozen day-old chicks in hot water, and you’ve succeeded in washing away any vestige of legitimate dietary input for your captive raptor.

Look up the term “washed meat” (as it pertains to Falconry) and you’ll further understand what I’m pointing out here.

Offering captive birds-of-prey this unfortunate by-product of the monster that is “factory farming”, (two words, it could be argued, never meant to be on ‘friendly’ terms with each other),  is in my estimation no different to rearing a human child on macaroni-and-cheese every day of their life — then wondering why he or she is sick, weak, or tired all the time.

Couple this approach with a poor or utterly non-existent exercise regime, and you have the precise recipe to accomplish “how to get a Golden Eagle killed and eaten by lions”.

Some years ago, I was reliably informed of a young man attending a certain high school in the Fraser Valley who had – somehow – come into possession of a Harris hawk…which he was routinely feeding hot-dogs. Or sausages.

What I’m attempting to point out should be obvious to even the most abstracted initiate: Neither exist. Thus, feeding a captive bird-of-prey tube-shaped abattoir-scrapings is abuse. Plain and simple.

It surely goes without saying the fact this young man’s parents did nothing to correct the situation, inclusive of (god forbid!) opening a book or two to find out what, exactly, Harris hawks eat. is an outrage. In this modern era, with knowledge of anything a mere handful of keystrokes away from you at any point in time, there is no excusing this brand of deliberate negligence.

The fact is, both rooster chicks and hot-dogs are garbage. Neither are suitable as a source of nutrition.

Well, you ask, why is it fairly routine to find North American raptor-handlers feeding day-old cockerels to their charges?

Permit me to enlighten you.

When raptors are fed day-old chicks, the raptor feels full – but is left almost-wholly unnourished. Its a cheap, lazy way to ensure the bird in question doesn’t put on too much weight, (as cockerels pass quickly through a raptor’s digestive system), and thus enables the lazy handler to fly the bird again, usually for public displays. Apparently its just too taxing a concept, for some, to use a more appropriate – nourishing – food source carefully metered out across the day to accomplish the same end.

I truly believe my mentor, Frederich II, would experience a metaphysical dichotomy were he to gate through space-and-time and bear witness to the absence of mindful stewardship day-old cockerels represent. And then – rightly – beat the human perpetrator to within an inch of his life for being so utterly obtuse as to have no better idea of what to put on the raptorial menu. 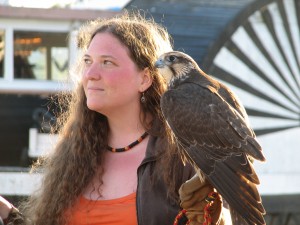 Careful, thoughtful attention to nutrition in captive raptors is critical to their ongoing health and well-being, and the easiest form of regard we can offer them. If its too expensive to purchase the food these beings require, have fewer birds. Even better, don’t possess any. Take up knitting.

Likewise, ensuring the water they bathe in, and the mews they sleep in are kept in a suitably sanitary state ought to be among the most basic of undertakings aimed at mitigating vectors for infection, or disease.

As I’ve pointed out to my assistants “If you wouldn’t sleep in a bedroom with the end result of your digestion in tidy mounds scattered about you, why would you expect one of our Feathered companions to put up with it?.

For the record, I’m usually rewarded with an expression akin to a horrified ‘turd look’ when my helpers are asked this question, which is probably appropriate…given the subject matter.

It is no challenge to the able-bodied to keep mews and bath pans clean. If it is, take up basket-weaving. Baskets don’t opine one way or the other as to what you scatter about you at bedtime.

We’ll continue this theme in “…Part 2″ when I cover, (among other things),  the absence of a mentored-apprenticeship program here in BC, and some of what The Falconlady & “Team Feathers” are doing to modernize that situation at the Provincial level.

The Ethical Falconer or, “what you don’t know will kill them” Part 2
What Makes Us Different…