The Ethical Falconer or, “what you don’t know will kill them” Part 2 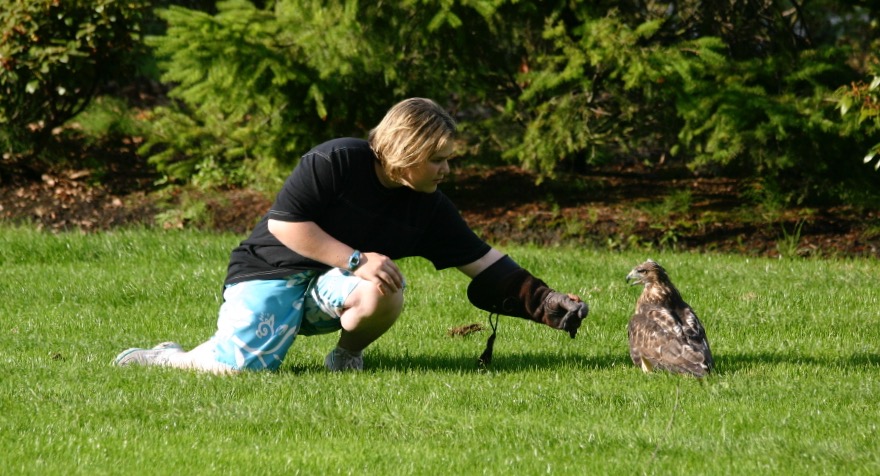 The Ethical Falconer or, “what you don’t know will kill them” Part 2

Posted in From the stoop

Comments Off on The Ethical Falconer or, “what you don’t know will kill them” Part 2

“We need another and a wiser and perhaps a more mystical concept of animals…
We patronize them for their incompleteness, for their tragic fate of haven taken form so far below ourselves.
And therein we err and greatly err. For the animal shall not be measured by man…”
~ Henry Beston ~

What say we pick up, more or less, where we left off?

There is an insidious attitude among too many individuals involved with the stewardship of animals, (a word I find myself chafing at more and more as time marches on), that the nonhuman beings they’re employed to steward are, in effect, “lucky” to be in a cage, pool, etc.

The attentive visitor to refuges, zoos, or other animal-focused facilities will detect this demeanour and mindset in assertions such as “Animals don’t have feelings”.

So…when Tahlequah the grieving wild-Orca mother who carried her dead infant for 17 days, surrounded by her supportive family, what – precisely – was that in aid of if not a heartbreaking demonstration of what any mother would feel after carrying their baby to term, only to have it die within an hour of its birth…?

Two close friends of mine who’d been long-time members of several aquarium-focused associations in the US ended their support and participation in captive-cetacean “research” several years ago, in part because of the widespread malicious indifference many trainers in this industry give voice to.

The deranged assertion – in one form or another, that captive cetaceans are insensate collections of skin, bones, and digestive organs, and the further unapologetic belief these creatures are here on Earth to perform circus tricks for humankind’s entertainment.

But this kind of ‘speciesism’ isn’t confined to those “caring for” captive dolphins, orca, seals, etc.

You’ll find it everywhere…if you’re paying attention. And if you’re going to be parted with the contents of your wallets by visiting places where animals are held in captivity, you have a responsibility, in my view, to be vigilant. For you are the eyes and ears who could save a life by doing so.

The same individual at the Greater Vancouver Zoo who singularly set up his Golden eagle, ‘Skye’, for death in the jaws of a captive lion, once announced to me as he pointed at a Harris hawk in his possession: “That is a feathered machine motivated only by food.”

He has a label for people who care about animals: “Balmy”. Its a derivative British term meaning “crazy” or “foolish”. To clarify further, using the word ‘balmy’ to describe someone equates to calling them a tinfoil-hat wearing kook. In other words, someone in need of an immediate psychiatric intervention.

This is not to say all captive-animal stewards are maliciously indifferent. On the contrary, if you want to personally witness what naked love for birds-of-prey looks like, go you to the Hawk Conservancy Trust in Andover, UK, and observe the love and joy in the wonderful team of stewards there.

I’d dreamt for years about flying multiple birds together to music before witnessing the “Valley of the Eagles” demonstration for the first time in 2009. And then…it happened, and the magnificence of the experience brought tears to my eyes. It was wonderful beyond words, in no small part because of the obvious, unabashed love between the Falconers and their charges.

It was the best demonstration I’d ever witnessed of what the human/non-human relationship is supposed to look like…a moment-to-moment honouring of the personhood of the noble birds-of-prey the HCT is home to.

If you have any reason to be in the UK, trust me, you want to go witness this for yourself.

Likewise, organizations such as the Naankuse Foundation in Namibia, and The Lion Whisperer, Kevin Richardson’s reserve in South Africa are but two stellar examples of individuals who’s love for wildlife sets them apart in a world sadly too full of exploitive organizations trying to make a fast buck on the back of captive wildlife.

The point, in all of this, is to spur your inner dialogue on the subject of “what part of acknowledging the sentience of non-human beings diminishes me?”.

Dig even deeper. Ask yourself if you’ve ever felt ‘uncomfortable’ when witnessing the handling of a given species by individuals anointing themselves as “experts”.

If you have, you all ready know the answer as to why you felt uncomfortable – why something didn’t look, sound or feel “right”, why it somehow lacked authenticity.

Perhaps there are other feelings associated with this experience…embarrassment, or even shame.

The preventative cure for these feelings, going forward, is the following: when you see something, say something.

You have a voice, and while there may be ill-timed, or poorly-phrased questions, there are no “dumb” questions.

Well, all right, there may be some dumb questions, but I’ll trust you understand what I’m getting at here. Ask me why one of my birds has feathers, and you’ll definitely get the ‘turd-look’.

A recent example of using one’s voice would be the action country-music icon Tanya Tucker took in early April of 2019 on behalf of the animals exploited by the ‘Special Memories Roadside zoo’ located in Greenville, Wisconsin.

She witnessed Siberian bears with nowhere to sit but in their own feces. She witnessed a Bengal tiger with an obviously broken leg – which had been left untreated – and was told by the zookeeper the tiger was “faking it”.

So Tanya used her celebrity for something other than herself, and focused the attention and the eyes of the planet on the ‘Special Memories’ zoo.

If you’re dealing with a legitimate animal-steward, they’ll be glad to answer you. There won’t be any evasiveness, re-framing of the question, or dismissiveness. They won’t “team” other bystanders into joining in on a session of belittling you, or getting a cheap laugh at your expense as if you should all ready know the answer to the query you’ve posed.

In fact, if this happens, dig deep, get even more assertive, and ask your question again.

Ask where this handler was trained, or for how long they were trained. Ask the name of the individuals who mentored them. Don’t settle for asides
like “Why would I tell you that?”, or “None of your business.” Pursue the answer – you paid to get into this facility, you’ve earned answers to your
questions. Remember that.

It is your business, because if this is a public/commercial space, both the handler and his or her employer are making money because of people like you.

As such, the public has a right to know the answers to these kinds of questions, just as the public bears some of the responsibility for alerting the appropriate authorities when those answers are dodgy, or not forthcoming at all.

A truthful good-steward will go further, and admit when they actually don’t know the answer to your question – they may even challenge you to see if you can help them in finding out if there is an answer. Pretending to omniscience in the presence of strangers is an admission of ignorance.
Remember that, too.

The fact is, even if the steward has answered the very same question a hundred times before you asked it, a good steward will know you never heard the answer before, and answer it again.

We’re going to continue along this thread in the next instalment, where, I promise, I’ll get more specific about what I mean by “what you don’t know will kill them”. Stay tuned.